I got attacked by a rose bush today.

It wasn’t actually that dangerous of a day, just more than normal. I thought it would be a funny title.

William had to clean windows on the workshop, which involved him being lifted in a makeshift forklift. But hey, they got rid of the falling apart pallet and gave him a brand new one, so it’s all good.

I weeded most of the day, but when I was done I got to prune and retie the rose bushes/trees to their supports.All of the scratches and stabs! My work gloves helped a bit, but they mostly just helped the branches adhere to me even more. At one point, I realized that the way I was tying them wouldn’t work, and when I let go to readjust I got hit in the face by the thorny branches. And they stuck to my hair. Good times.

Moral of the story: roses are pretty, but they totally are not worth it.

While I tackled (literally at times) the roses, William went to a meeting at his school. He wanted to go in for a short, personal orientation since he has never been to German school before and doesn’t know what to expect. It was very helpful. Among other things, he finally learned that school is from 8 until 4. Since it is not only an academic program, but also takes the place of the internship generally required, the timing mimics a workday.

After returning, William made pie. He has been wanting to make something that they don’t have in Germany, and we all know how famous his pies are. Can you believe they don’t do pie here?! He made it with butter instead of his usual lard, since everyone here is vegetarian, and used some freshly ground whole wheat. This made the crust crumbly, but still absolutely delicious. It was an apple pie, using apples from the yard. Yay. H and I were so impatient waiting for it!

Also, I don’t know if this is our hosts or Germans in general, but they are insane about cleanliness. I haven’t noticed it too much in the work that I have been doing, but William really saw it today. Let’s just say, their oven puts every other oven I have ever seen to shame.

We also heard back from the WG today. If they don’t hear back from the people the want to buy the place by Friday, the apartment is ours. Which means they decided to sell, but maybe the buyers might still back out. Here’s hoping. 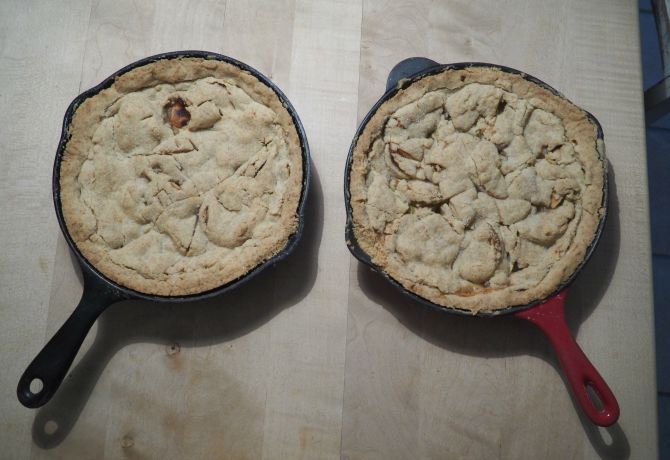 Will drew a house on the left pie

I’m realizing that the amount of grain and sugar I am eating here is not good for me. Although I generally feel fine and only occasionally feel like I’m missing out on protein, my acne is insane right now. But it just all tastes so good.

I’ve been making a lot of homeless jokes lately. For example, today I had to clean the chickens’ winter home. When William came to see what I was doing, this conversation took place:

Me: Lucky chickens. They have a summer home and a winter home. I don’t have any home.
William: I don’t think you would want to live with the chickens.
Me: At least they would feed me.

Also, a lot of cleaning happened today. There is a big market happening on Sunday, and a lot of people in the area sell out of our hosts’ garage, so everything needs to be clean and look nice. We cut a bunch of grass around the fence, cleaned up the border along the side of the road, and washed the greenhouse windows. I’m not sure what everyone else was cleaning while I was in the winter chicken coop, but that is where I spent most of my day. Getting covered in mud, paint, and a little bit of chicken poop. Plus just murdering my hands with that much water. I didn’t even get everything clean!

By the end of the day I was just begging for 3pm to come so that I could get out of my clothes and shower. But after our 3pm meal (which is lunch in this house), we decided to go wash the greenhouse so that we wouldn’t have to work tomorrow. That wasn’t too bad of a sacrifice!

The rest of the evening was just kinda chilling. I stalked Instagram to learn about the new essential oils that doTERRA is releasing (SO pumped to try them out!) and William chatted with his friend Drew, who is currently living in Korea.

So we heard from the WG again today. They are selling the apartment. Back to square one. I’m trying to keep this blog family-friendly and not swear, but I am so f***ing sick of looking for apartments. We have been contacting literally every listing for over a month. I’d say 2-3 replied saying the apartment was already gone, 3 said we would have to meet with them in person immediately (back when we were still in America), 2 said they didn’t want a married couple, 1 expressed interest in talking to us and we haven’t gotten any replies from them since, and only 2 have even let us look at the apartment. Just those stats are probably 25% of the places we’ve contacted – most never reply. And the two that we visited? One would have been too expensive and one, the perfect one, decided that we didn’t get to rent it 5 hours before we were suppose to sign the lease.

Last night we emailed a bunch more places, and tomorrow we will call as many as we can. But I am just sick of putting in this effort, going all the way out to Kaufbeuren in our precious free time, just to be let down. I’m over it. And as much as I joke about being homeless, I really don’t know what we are going to do if we can’t find a place in our price range.

One of the new doTERRA oils is a blend called Peace. I could use some of that right now. If I had their new emotions kit right now I would be bathing in it.

At least we can live in Ingenried as long as we need.