Today was mostly a day off. In the morning we had to replant the strawberries, but that did not take too long.

We were going to go to Füssen with our fellow WWOOFer (I’m going to call her H from now on because she hasn’t given us permission to post her information, but it is getting annoying to keep typing “our fellow WWOOFer). However, our ride bailed on us and shortly after we started biking into Kaufbeuren, we realized that we had forgotten the bike lock. It was too late for William and I to turn back, so H turned around and we made plans to meet her at the Kaufbeuren Bahnhof in the early afternoon.

We continued on because (excitement!) we had a meeting about an apartment. Biking all the way to Kaufbeuren was painful, but it needed to be done. The apartment looked great. It was still in the middle of being turned from a psychologists office into an apartment, but it was very promising. The kitchen was a good size, there were two bathrooms, laundry, and our bedroom was huge. It is a WG, so we will be living with 2-3 other people, but we get the biggest room because we are married. The room itself is 30 m² (about 300 sq. ft.), and it has a balcony with space to plant herbs and such. The location is perfect, too – very close to the train station, the bus station, and the Volkshochschule (where I will be taking German class). William gets free bus travel to school.

Tomorrow we meet our roommates and sign the lease for September 15!

Then we stopped and got döner for lunch before heading to the train station. Unfortunately when we got there, we realized that the next train to Füssen wasn’t until 2pm. Then we realized we had given H the wrong bus info, and even if she had waited for the right bus, she wouldn’t be there until after two. A 3pm train to somewhere an hour away is just too late. We still couldn’t get a hold of anyone that could give us a ride and there were no more buses back to Pforzen for the day, so we road our bikes back. Thankfully the trip is mostly downhill. 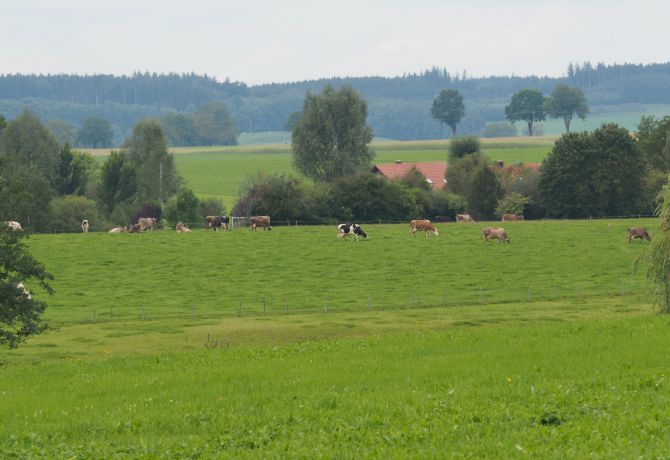 The cows were out in the pasture today.

We got back to the farm to find that the daughter of our hosts, as well as her boyfriend and roommate, had arrived. We didn’t know they would be here and it was a bit stressful for me. While she seemed very nice, the daughter was a bit bossy, which was off-putting. At dinner there were 5 native German speakers, so I couldn’t understand anything that was going on. William still could though! Thankfully once in awhile they brought us up to speed. As an introvert, it was all very draining. Dessert was homemade apple strudel, with homemade dough and apples from the yard. Very good!

Although today definitely had its highlights, it was also exhausting and rough. I didn’t feel very good for the second half, which made things harder. But I’m trying to look on the bright side: we won’t be homeless when we are done working at the farm!