Prague is an absolutely beautiful city. If you ever get the chance to go, take it.

I did not know much about Prague at all, just that it is a famous European city. So I didn’t know what to expect. And I was completely amazed. 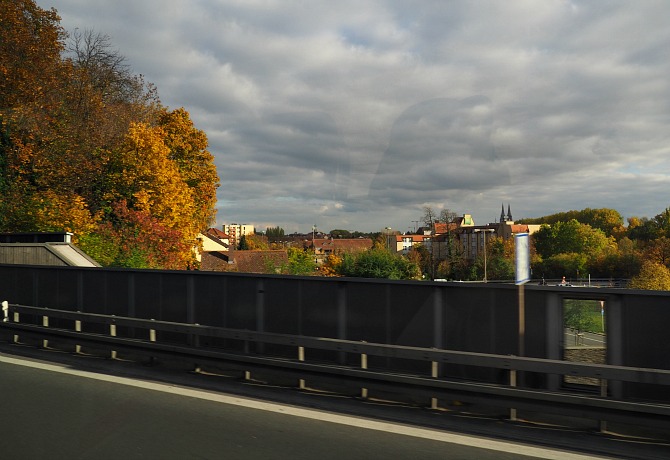 On our bus ride

William and I both left our classes early to catch a 12:10 train to Munich. Due to obnoxiously timed transfers, we didn’t get on our bus until around 2pm for a 7pm arrival in Prague. The bus there (and back) was very nice. Two stories, free WiFi, a small vending machine, and a WC. The ride was uneventful. We read and ate snacks.

Upon arriving in Prague, we first noticed how beautiful the section of the train station where we entered is. Next we tried to figure out how to get to our hotel, which proved to be a challenge in the huge station. We also got offered weed by someone who needed money for a train ticket.

After getting on a tram going the wrong direction, and both of us being quite crabby, we eventually got to our hotel, the Hostel Pilgrim and Hotel. We stayed in the hotel portion, which is down the street a bit from the hostel. It was quite nice. Simple, but clean and it has a very good breakfast. Each hotel room is broken up a bit so that it feels bigger. And only 66€ for the weekend, too! It is outside of the city center, but it is not a bad walk. We chose it because it was a block from the hotel where a group from William’s church was staying while on a reformation trip. 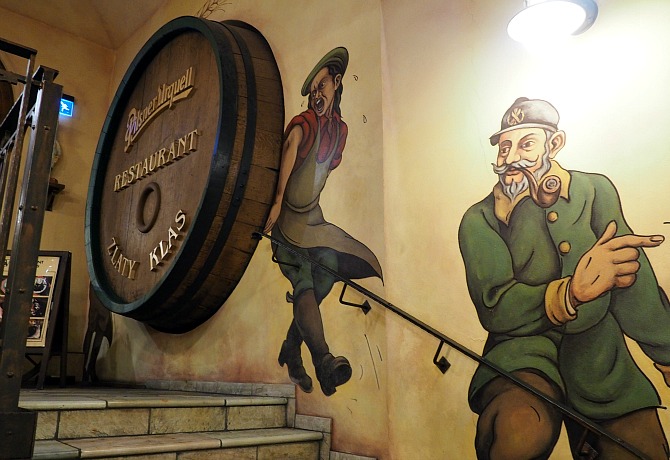 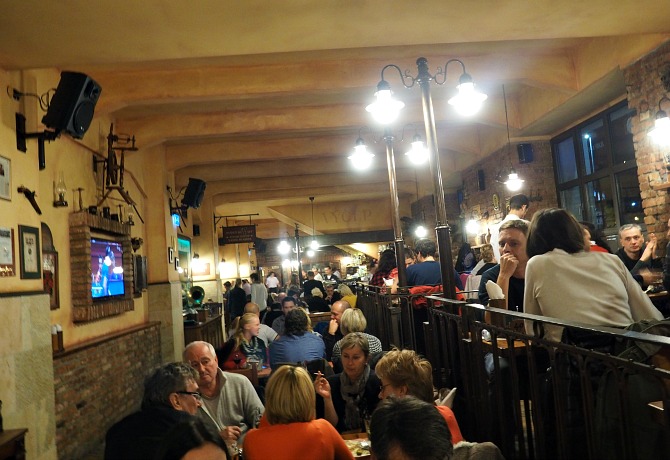 Our first evening was just dinner before showing and bed. The restaurant we went to is called Zlaty Klas and was not far from the hotel. It was packed at 8:30 and smoking is allowed, but it wasn’t too bad. The atmosphere was great and the food was amazing. I got traditional Czech goulash with 3 kinds of dumplings. William got chicken baked with cheese and pesto, plus a side of fries. That plus 2 glasses of wine and a hard cider only put us back 480 CZK (just under $20). We were stuffed and quite satisfied when we left. 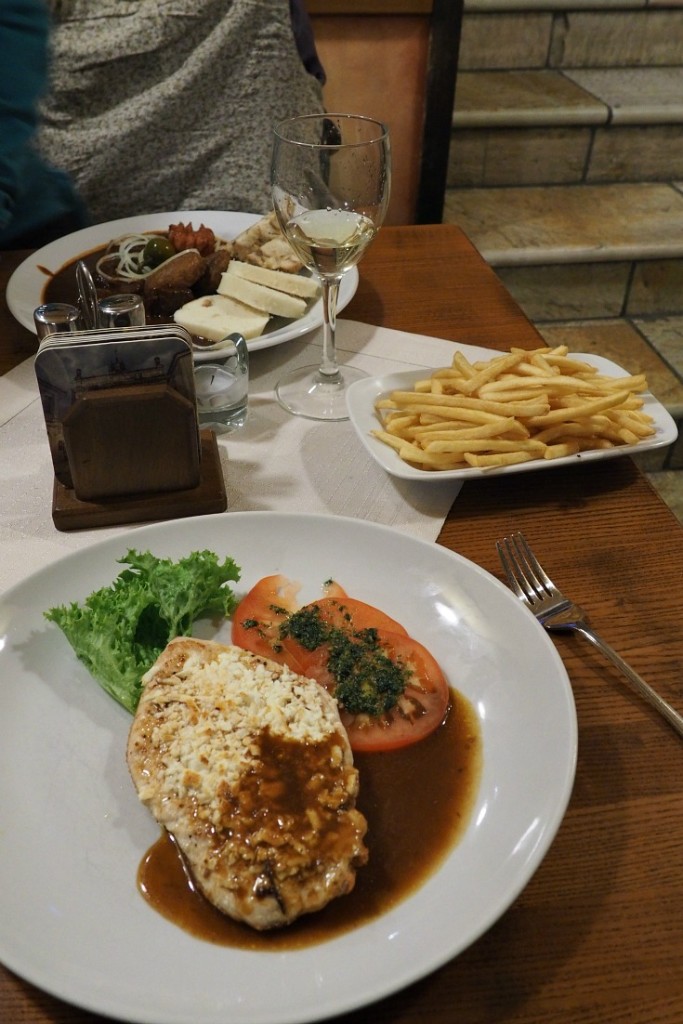 Saturday morning we started walking toward town. On the way we noticed that quite a few people don’t pick up after their dogs. By the end of the weekend, though, we realized that most of Prague is quite clean; it was mostly just those few streets we took that were problematic. And the dogs always went on the side, so as long as you walked down the middle of the sidewalk you were fine. 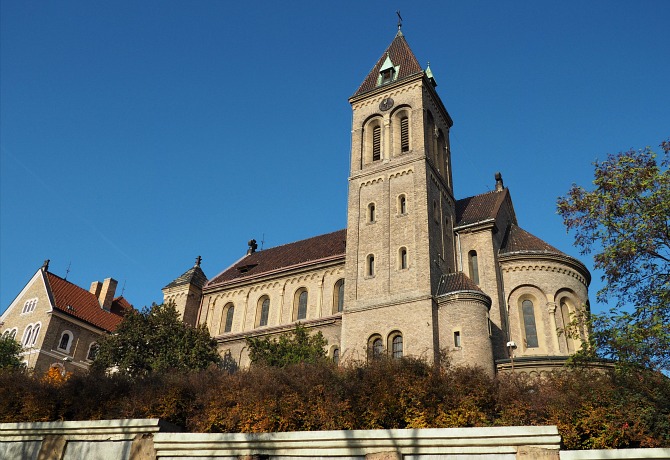 We found the entrance to a large park and spent the entire morning walking through it. The weather was perfect: crisp autumn air so we didn’t get too hot on the climb to the top, clear skies with a bright sun, and so very beautiful fall colors. I can’t think of any better way to have spent our morning on this perfect fall day. You just get lost in the gorgeous nature and forget that you are in a huge city. 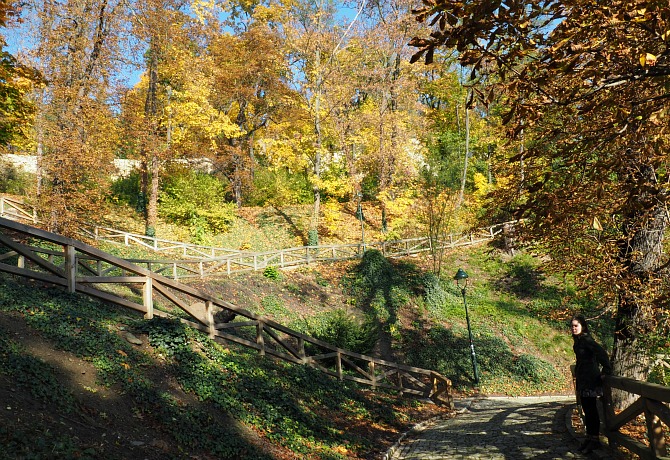 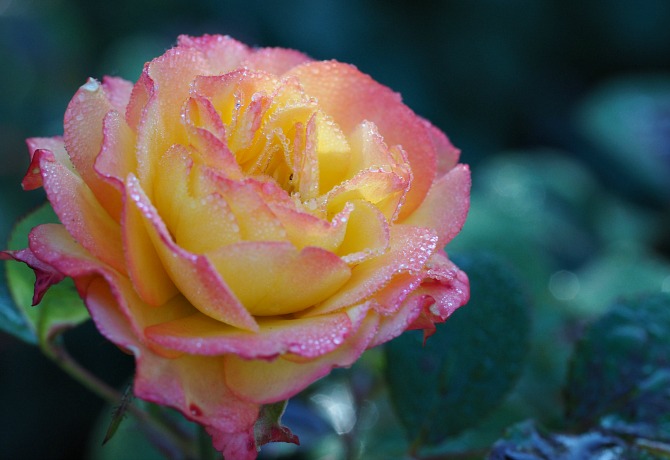 At the top of the park, we found a rose garden, and observatory, and other buildings. We also visited the Petrin. It is often compared as a smaller Eiffel Tower. We climbed to the top, which gives a gorgeous view of Prague. William being a student is very useful: we could go to the top of the Petrin and walk through a cool mirror maze from the late 1800’s for only 300 CZK total (just over $12). 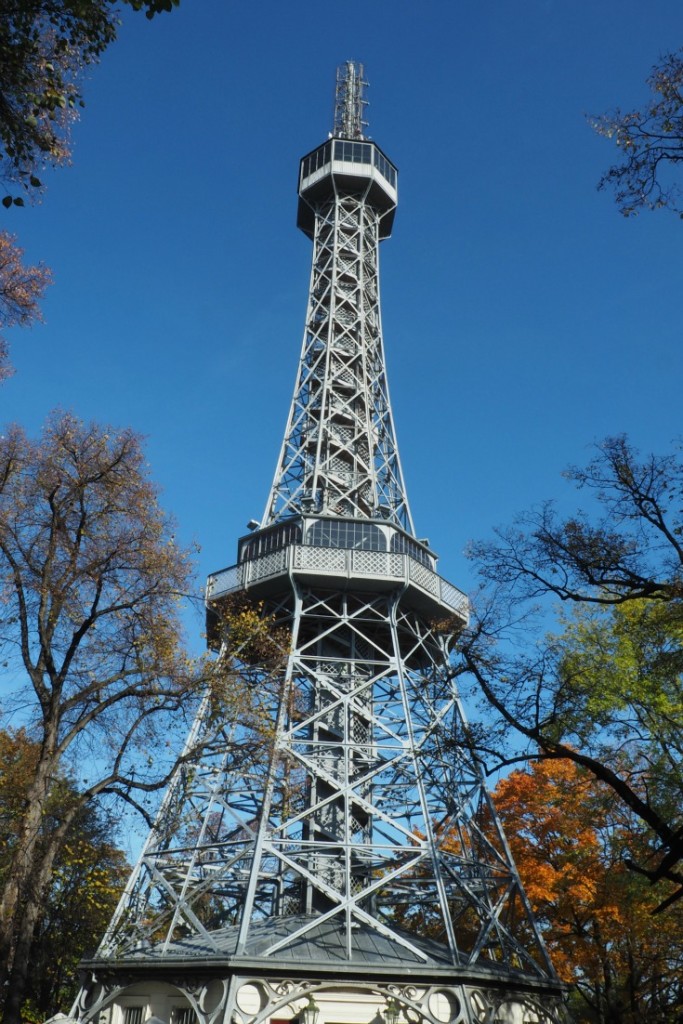 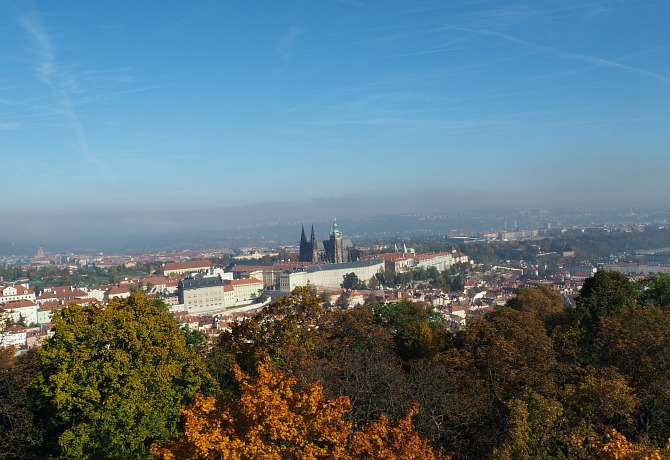 View of Prague from the Petrin

It was around noon when we finished with everything and headed back downhill. We walked back to the hotel for a snacky lunch and to check in with Lora, as the group was now in Prague. In the afternoon we walked around the area by out hotel: a mall, a church, and this scenic overlook were the highlights: 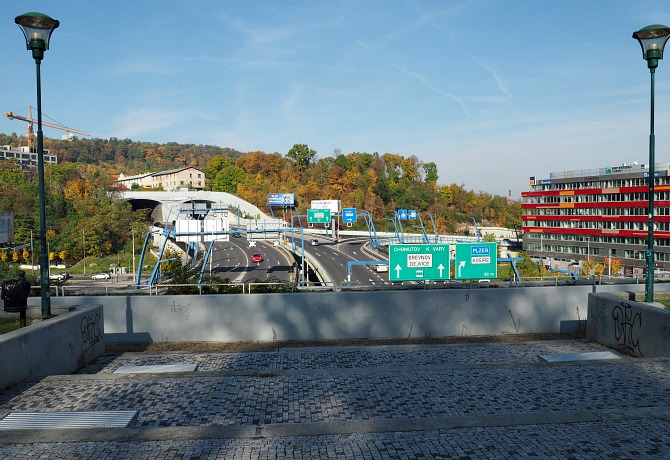 Yes, this is a scenic overlook of the highway

We met up with William’s mom, sister, aunt, and another relative around 3. After catching up, we went for a walk with Lora (his sister) down to a castle and a gorgeous basilica.

Dinner at the group’s hotel was nice. There were quite a few people from William’s old choir on the trip (I was in the choir for a year, too, but William was in one of the All Saint’s choirs for about 17 years). The dinner was a huge buffet of Czech foods, and was quite amazing. We caught up with Jim and Bonnie, the leaders of the trip (Jim is the director of music at All Saints and played at our wedding), over dinner and William showed off some of the things he has made in school.

After dinner, we mostly just working on planning our Sunday. We wanted to do as much as possible before leaving at 5pm. We also picked up a suitcase of things we wanted brought from home.

Even though it was Daylight Savings, Sunday morning came early. We packed and checked out by 8am so that we could eat breakfast and still get out of the hotel in time for church. Between our hotel breakfast and our dinner the first night, we realized that you have to keep an eye on your dishes if you aren’t done yet. They are very efficient at removing empty plates! Our first night, William said he was done, so they took away not only his plate, but the side of fries that came with his meal. There were only a few left, but we still were planning on eating them! 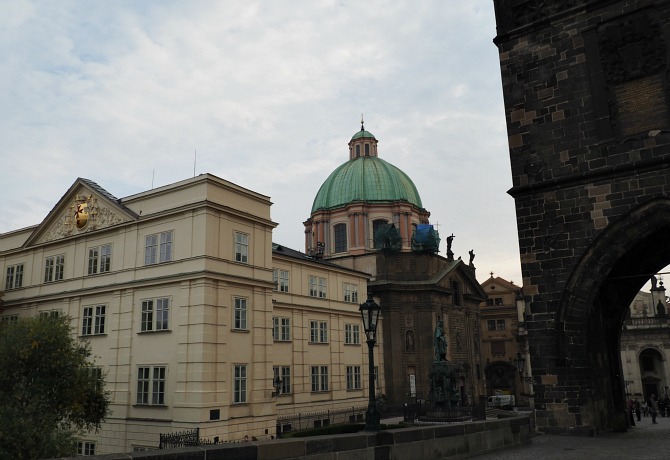 On Charles Bridge, looking over at the church we were going to (green dome)

Anyway, we walked across the Charles Bridge to get to the Church of St. Francis of Assisi, where we attended Mass. It was a gorgeous, small church. We didn’t understand anything, but I used the beautiful fact that Mass is the same in every language to follow along and teach myself a few Czech words. 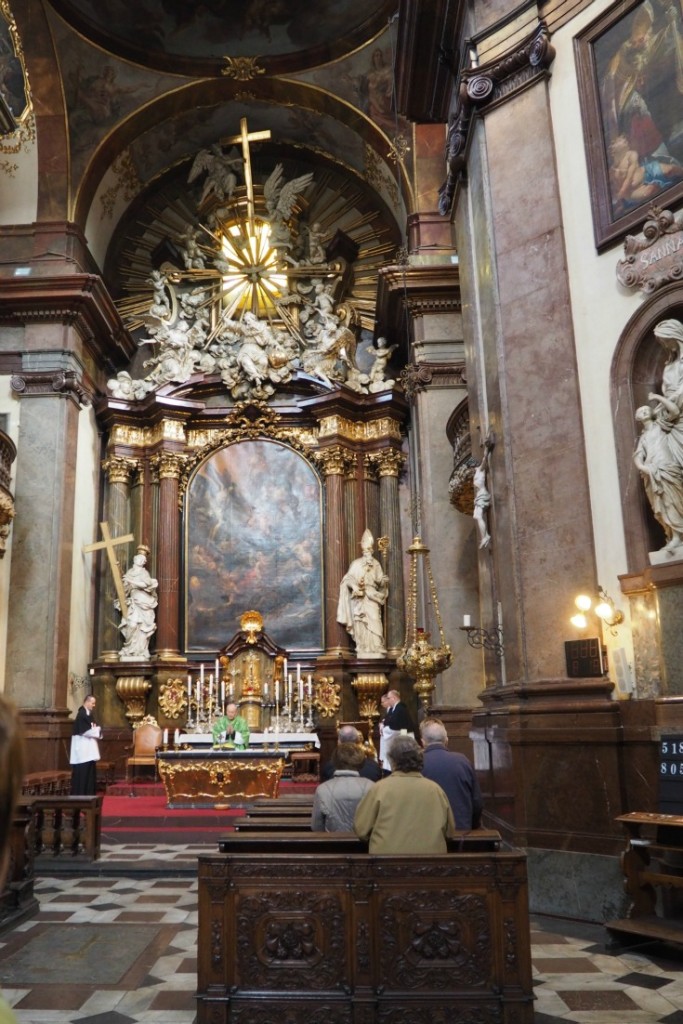 Inside the Church of St. Francis of Assisi

After church we visited the Municipal Building for an Art Nouveau exhibit. The Czech word is Secese, which William says means it was related to the Austrian Secessionist movement. I am not a huge Art Nouveau fan, but this was a pretty cool exhibit and the building was gorgeous. All the buildings in Prague are gorgeous. 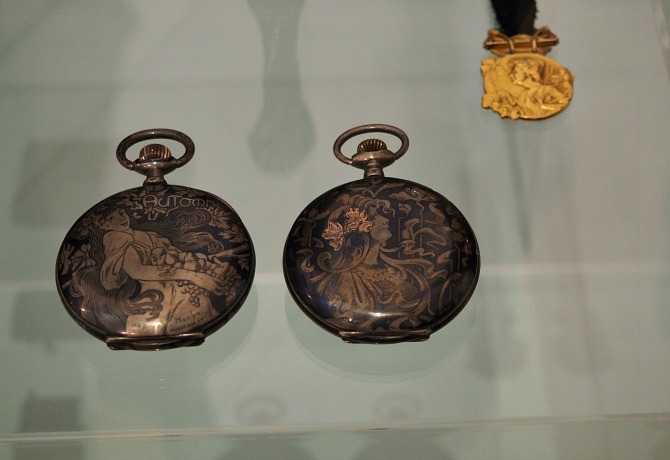 Watches from the Art Nouveau exhibit

Finally it was time to meet up with the group. We headed to the Old Town Square and bought a Trdelnik, which is dough wrapped around a spit and cooked over coaled and topped with sugar. It’s as tasty as it sounds. We bumping into the group and joined the last leg of their morning tour before stopping to have lunch on Town Square at Restaurant Mincovna. Again, very good and filling. From there, the tour went to Wenceslas Square, Bethlehem Church, and Charles Bridge. 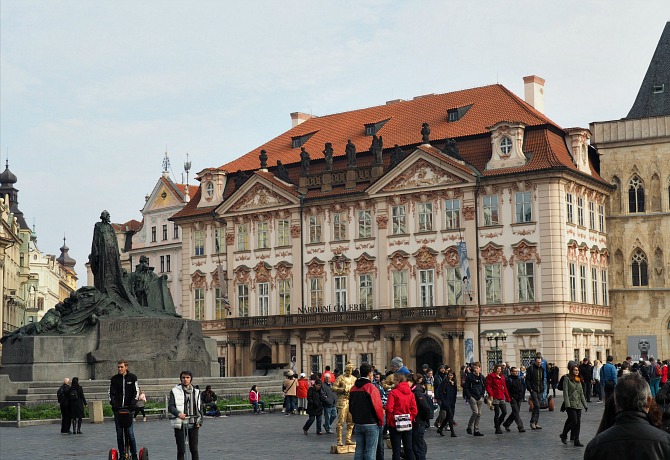 Some fun facts: The Bethlehem Church was built by communists. Outside the gate to the Charles Bridge, there are the numbers 135797531. Supposedly, this refers to when the building of the bridge started: 1357, on the 7th of July, at 5:31 in the morning.

After Charles Bridge we said our goodbyes and walked back to our hotel to pick up our bags and head to the train station. The travel back was exhausting, as we did not get home until 11:30 and we were really dehydrated. Also confirmed our suspicions that our roommates don’t know how to take out the garbage. But that has no bearing on Prague.

As I said, Prague was an amazingly beautiful city, and 2 days was not enough time to spend there. I cannot wait for an opportunity to go back and more properly see it. Hopefully next time we can be there for a whole week. If nothing else, we still have over 3000 CZK to use up! 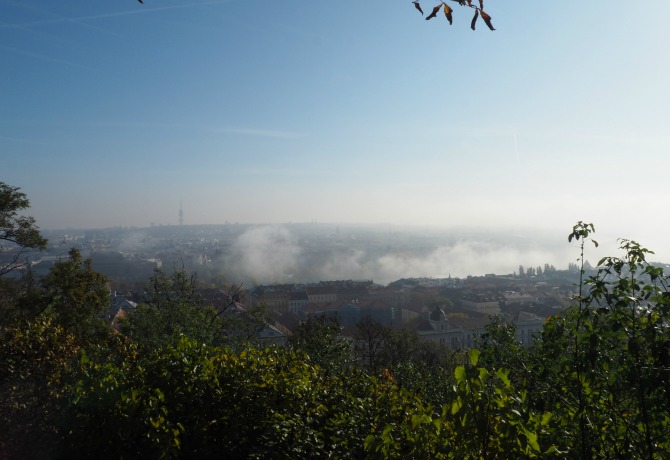