My day was fairly uneventful. Last night we quickly learned that our duvet (135×200) was too small for two people, but I don’t want to give it up. So we solved it by buying a second set of Aldi sheets and putting the duvet cover on the second half of our 4 season duvet. And we needed the second pillow case anyway.

We got up before the sun, which was awesome since there is no light yet in the bedroom. We had müsli (with organic, local, plain, whole yogurt for me and local, whole milk for him) for breakfast and shaved for the first time since we got to Germany. It took us that long to find the razor blades! I helped William get ready for school the best I could and he was off at 7:15 to get some cash, catch the bus, and get to school with plenty of time to spare before it started at 8:05.

We did see one of our roommates for about two seconds. He’s an English and history teacher in his 20’s who lives in Augsburg on the weekends and Kaufbeuren during the week. We never heard him come in last night, and he was gone before 7am. We did get to talk to him a little this evening.

I quickly finished getting ready for my day before the workman arrived at 8. It was still dark in our room, so I started typing up blog posts and going through pictures. Once it was light enough, the organization started. Due to the lack of furniture, I mostly just emptied all the bags and created piles according to theme. But I think I did a good job.

When I got bored, I walked to the church and looked up where the library is. And quickly learned that heels + Europe (read: cobblestone) do not mix. Sad favorite boots.

The Stadtbucherei (library) here is fantastic. That, of course, is mostly based around the fact that it is a library. It has movies and audio books that I think will be super helpful for us. And lots of books for when my German is more advanced. Today I went for the internet and to get a library card. The card if free for your first year in the city, and then 12€ (6€ for students and people looking for work) a year after that. 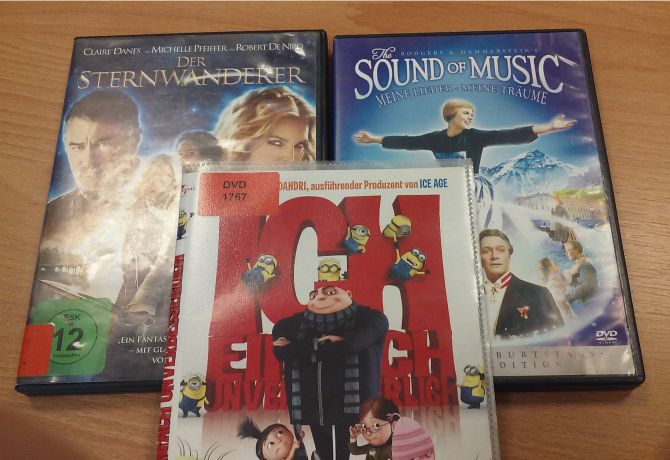 While at the library I picked out some of my favorite movies (plus Sound of Music, because obviously) to watch in German with English subtitles. I am hoping to eventually find a copy of both the print version and the audiobook of Harry Potter. If not, Chronicals of Narnia (which I have found) will have to suffice.

After killing enough time, I walked over to the VHS. The woman I needed to talk to about my integration course wasn’t available until two. And….I learned that they are full for the October integration course. I put myself on the wait list, but if that doesn’t go through, I can’t start learning German until April. Not okay.

They say it isn’t good to eat your feelings, but when your feelings are honey-salted-almond chocolate and are accompanied by your favorite chick flick, I’m going to call it okay. That’s what happened once I got back to the apartment until William got home.

When he did, we talked about our days (he will write about his first day at school tomorrow) before heading out to pick up some meat for dinner. Our first cooked dinner was cheeseburgers and pan fried potatoes. We were going to bake them, but turning on our oven tripped the breaker. So we need to call our landlord about that. It was still delicious as we ate it off the floor.

I am really looking forward to getting settled. Beyond just getting all the red tape and expenses out of the way, I really miss having a routine. I work for myself, on the computer. It is very hard to get work done when I have to travel to do it, and it is even harder when most of my files and resources are on the computer that is currently dismantled and missing some critical parts. But without work, it is a long, boring 8 hours while William is at school.